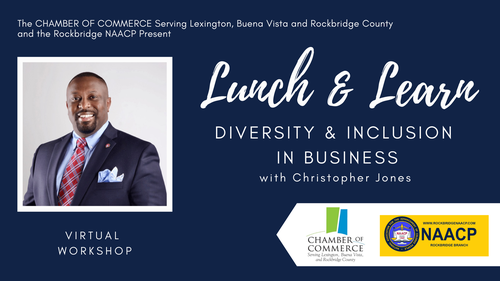 Event Description:
The Chamber and Rockbridge NAACP are pleased to welcome Christopher Jones to facilitate our next Lunch & Learn Virtual Workshop on September 25th at noon. Jones will facilitate a discussion on "Diversity & Inclusion in Business" that will address these three broad points: This event is FREE and open to the public.

The Honorable Christopher B. Jones represents the people of the Friendly City as a member of the Harrisonburg City Council. Formerly serving as the Mayor of Harrisonburg, Councilman Jones is in his second term as an elected official. He points to his joy in interacting with the City’s people on a daily basis as the motivation for his continued dedication to service through the City Council.

Born in Danville, Va., to James and Marie Jones, Mr. Jones is the youngest of three sons. He was identified as an advanced and gifted student during his early years and created a fast track for himself to graduate from high school an entire school year early with an advanced degree in 1996.

Mr. Jones’ motivation to succeed started around the time he was 8 years old at his grandparents, Charlie and Ollie Barksdale. It was at their home when Mr. Jones declared to his grandparents he hated school. Instead of any traditional speech parents and grandparents would typically give their children, the Barksdale’s took the time to explain to young Christopher that they were unable to attend school and could barely read and write. They explained how they had to work fields and sharecrop, and that education was a luxury for people like us back then.

This forever changed young Christopher and motivated him to study culture and history from the perspective of and about African Americans. In his later teenage years, Mr. Jones served as vice president and president of the Baptist General Convention of VA Youth. BGC of VA at the time was a conglomerate of hundreds of churches from around the state, and it was on this stage in front of thousands of his peers were Mr. Jones began leading.

Mr. Jones began his academic career at James Madison University in the fall of 1996. JMU was the only school he applied to and Mr. Jones was beyond ecstatic to start wearing purple. While attending JMU Mr. Jones was extremely involved, socially and politically. He quickly emerged as a student leader on campus, serving in leadership roles for multiple organizations, including: Brothers of New Direction, Black Student Alliance, National Association for the Advancement of Colored People, Students for Minority Outreach, and more. Mr. Jones’ most significant leadership role on campus was serving as Student Government Association Senator. It was there, as one of the only people of color, Mr. Jones’ leadership on campus expanded beyond people of color. It was there where he was able to fight to see greater funding for organizations that represented students of color. One major difference Mr. Jones made was leading the charge to have JMU recognize Martin Luther King, Jr. day as a campus holiday.

Mr. Jones graduated from JMU with a bachelor’s in sociology and a minor in business. He has since taken on the position of advertising account executive and leader of Virginia Job Connections for WHSV TV-3 in addition to his role as City Councilman. His civic involvement, in addition to City Council, has included serving as Council representative on the School Liaison Committee, Community Criminal Justice Board, Harrisonburg-Rockingham Chamber of Commerce and JMU Liaison Committee, among numerous other Committee roles. He has also dedicated himself to working closely with the City’s Economic Development initiatives and local businesses, in addition to focusing heavily on youth education in the community. As Mayor his tie breaking vote was pivotal in ensuring the city participation and partnership in construction of Hotel Madison and Shenandoah Conference Center. He was also an instrumental lead in the construction of Elon Rhodes Pre-Kindergarten school, Bluestone Elementary and, more recently, the
future 2nd high school.

Mr. Jones served at the request of Virginia Governor Terry McAuliffe on the Virginia ABC Enforcement Expert Review Panel which was instrumental in constructing the response and details of Executive Order # 40 (2015) an effort to improve Virginia ABC Law Enforcement by requiring additional extensive training and oversight after the unfortunate violent arrest of Martese Johnson near the University of Virginia in Charlottesville, Virginia.